I just uploaded a Python version of Judd and Guu’s perturbation code to my website (code; notes).

If you happen to be a Python programmer, or a computational economist (even better: both!), then any feedback you can give on the code is highly appreciated. I’m fairly new to Python, so I’m sure I could have programmed some parts more efficiently.

Oh, and here is a picture of a bunch of Canberran kangaroos: 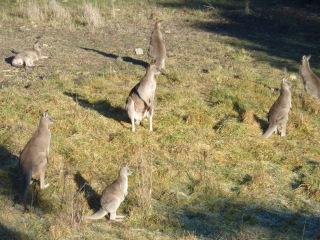 I’m having another assessment meeting in September 2014; this time it’s about a possible promotion to associate professor. So Goal #1 is to take a good look again at my research and education vision, and discuss it with whoever I can discuss it with. I got quite some inspiration from the keynotes and discussions at IIFET2014. Not that I went there with a blank slate, but it was good to see my ideas confirmed, in a way, and complemented by other people’s ideas.

I have decided long ago that I will focus on the economics of coastal and marine ecosystems. My background is mainly in bioeconomic modelling, so it is logical to focus my research on the kind of questions that require such modelling. But then the question arises: aren’t many other people doing that already? People have been doing theoretical fisheries economics since the 1950s (or longer, if you consider Jens Warming’s work). And there are gigabytes of applied bioeconomic fisheries models like FishRent and Mefisto, and wholesale ecosystem models like Atlantis, where fishers are included as some sort of predators.

But that’s it, actually: either the models are very abstract and qualitative, so that they can be analysed on paper, or they are very detailed and quantitative, so that they can be used for policy assessment or scenario analysis. The problem with the first is that they lack realism; the problem with the second is that they lack transparency. Either you can explain what drives your results, but then your results are close to useless for policy makers, or you can advise policy makers but you cannot explain where your advice comes from.

What has not yet happened much (I know there are people doing it, but not many), is to take the theoretical models, and make them more realistic to the point where you can maintain some intuition as to what drives your results, even though you cannot prove fancy theorems anymore. Macroeconomists and financial economists have reached that stage long ago: where their models get too complicated to be solved by some math magic, they use computation. This way you can add more realism, while maintaining a fair amount of insight into the mechanisms at work. My intention is to apply such computational methods to problems with coastal and marine ecosystems. This includes a lot of fisheries, but also other ecosystem uses, goods, and services.

Which brings me to Goal #2. The Crawford School of Public Policy of Australian National University has among its staff a number of people who have applied computational economic tools to fisheries problems, like Tom Kompas, Hoang Long Chu, and Quentin Grafton. I’m here to learn at least some of the methods they use. Originally I wanted to stay about two months, but for several reasons I only have about two weeks. But in the short time frame I have I’m trying to get the most out of it.

And lo and behold, I have a first result to show you. My first hurdle was writing a perturbation model in a program I can work with. Their models run in a combination of Matlab and Maple, but I don’t have a license for either of them, and I’m not well-versed in Maple. Hoang Long Chu was so kind to give me a paper by Kenneth Judd and Sy-Ming Guu on writing perturbation models in Mathematica – another program I don’t use, but luckily the paper explains the method well and it presents the entire Mathematica code for a simple optimal growth model. So I decided to write the same method in Python – my language of choice for its elegance, simplicity, and speed (ok, compared with R, which is neither elegant, nor simple, nor speedy). It took me a few days but here it is: the Python code and a pdf with some notes on the paper and the model.

I was going to write a long post about IIFET 2014, and how great a city Brisbane is, and how cold Canberra is. But honestly, now with the MH17 crash, I feel this is just inappropriate. But neither can I not write – I can’t pretend it didn’t happen. So just a short note for those who were wondering where I am.

I flew to Brisbane via Singapore on 4 July 2014 for the IIFET conference. I remember looking at the map (you know how they like to show you where the air plane is) thinking: “whoa, we’re above Ukraine.” I just assumed it was safe – they wouldn’t fly over the place if it weren’t, right? Anyway, I enjoyed Brisbane, gave my presentation, met a lot of friendly and interesting people, had a great dive on Stradbroke Island, flew to Canberra, checked into an Airbnb place, set my iPhone at air plane mode so that I wouldn’t be woken up by any e-mails or text messages in the Australian night, woke up again, switched off air plane mode, and immediately I got a message from a friend asking whether I was safe and sound, what with the plane crash and all.

I think all that must be said has been said in the news media and I have little to add to it. Of course I’m shocked, but anything I can say would just repeat what others have said already. It’s a weird feeling that both my country of origin and the country I’m visiting are in mourning. Flags will be half mast in The Netherlands and Australia tomorrow.

My condolences to the families and friends of the victims.