I visited the fishing village of Pangandaran, Java, during my holiday in Indonesia. It’s a beautiful place, delicious fresh grilled fish (ikan bakar), and you can watch the local fishing traditions.

I was shocked, however, by the sheer amount of litter in the sea, especially plastics. The problem is, apparently, that a nearby river discharges a lot of litter from upriver villages and towns, and the shape of the coast makes it a natural garbage collector. The result is heartbreaking:

It was Saturday and I felt a craving for nasi goreng, perhaps with some tempeh goreng or beef rendang. Luckily, Saturday is market day in Wageningen, and I had noticed earlier a small stall selling Indonesian food at the open market on the church square. I decided to check it out. There is something strange with Indonesian food in The Netherlands: the Dutch eat a lot of it (nasi goreng, babi panggang, krupuk, sambal, acam campur), but because the trade is dominated by Chinese restaurants selling their own poor imitation of it, a lot of people think they are eating Chinese food.

A Dutch man so tall he barely fitted in the small cramped minivan took my order. I thought he looked a bit silly in his traditional Indonesian batik shirt, but when I learned his wife was from Indonesia I could forgive him. I asked who his costumers usually were. Do many Indonesian students buy his food? Or perhaps residents of the home for Dutch-Indonesian elderly people, here in Wageningen? Yes, every now and again, but not many, he said.

The elderly home is called Rumah Kita: Indonesian for “our house.” There is a small catch here, because in Indonesian the word for “us”, “we”, or “our” can be inclusive or exclusive. Kita is the inclusive form: it includes the person spoken to. The exclusive form is kami. If it were called “Rumah Kami” it would have sounded a bit like “You! Cheeseheads! Sod off, this is our house.” But the name Rumah Kita sends a welcoming message to all elderly members of the Dutch-Indonesian community: come and join us, we have nasi campur on the menu today.

These are the people who were born in places that at the time were called Batavia, Buitenzorg, Weltevreden, Bandoeng, or Soerabaja. Their father might have been a Dutch clerk for the colonial government, who started a family with a Javanese woman and decided to stay in The Emerald Belt. Or perhaps their grandfather was a planter who went to the Dutch Indies to put his study at the Landbouwhogeschool Wageningen to practice on a plantation near Malabar or Kalibaru. Overwhelmed by the Japanese invasion in the Second World War, they would have gone through unspeakable hardships in Japanese concentration camps. After the war they would have sought refuge in those same camps during the Indonesian uprising, when many Dutch, Dutch-Indonesians and ethnic Chinese were killed by the insurgents. Eventually they would have migrated with their parents to The Netherlands, most of them after Indonesia became independent. A lifetime in a cold country they only knew from their schoolbooks awaited.

As a folk musician and traveller, I have been searching for songs in the Dutch musical tradition about homesickness. The only songs I found so far are written in the 1950s, by Dutch-Indonesian artists, about their homesickness for the Indies. I admit I have mixed emotions about these songs. We were never supposed to be there. The Dutch have been terrible overlords to the Indonesians: when the Brits handed back the Indies to the Dutch after Napoleon was defeated, the Javanese revolted because they would rather live under British rule than under the Dutch. But the emotions expressed in these songs are genuine, and intense. Whatever you think of the geopolitics, you can’t deny their longing for the place that features in their earliest memories.

A small, fragile elderly lady with a walking stick came up to the stall with a long list of orders. Rendang, ketopak, some pisang goreng, and did you still have that delicious chicken curry with sereh? Yes, all frozen please, it’s for the week. For now I would just like one lemper please. When she sat down next to me with her snack I noticed a slight trace of Asia in her features. I asked whether she was from the Indies. Yes, she said, born and raised in Surabaya. We munched away on our food and chatted a little with the batik-clad man’s Indonesian wife. I watched as a group of Dutch students walked past on brightly painted wooden shoes – an initiation tradition of one of the local student societies. A group of Chinese students stared at them, giggling and taking pictures.

“I always get tears in my eyes when I eat this,” the elderly lady said. The Indonesian woman replied by asking “Are those tears of joy or sorrow?” The elderly lady looked at her with a thoughtful smile and said “I think it’s because of the tastiness.” 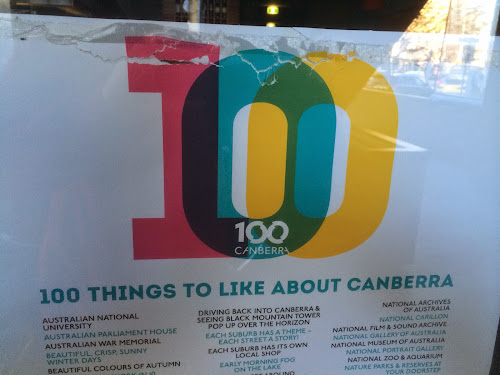 When I told the lady of my B&B in Brisbane that I was going to Canberra, she looked puzzled: why do you want to go there? I’m in Sydney now, and when I told the bloke at my hotel’s reception that I had just come in from Canberra and all he said was: “I’m sorry.” Today somebody even apologised for Canberra!

Come on guys, it’s not that bad! Here is a list of good things about Canberra.