For a country that controls a chunk of sea one and a half times its land mass, the Dutch are pathetic eaters of seafood. OK, granted – we’re rightly proud of our slightly-cured herring (which is mostly caught by the Norwegians) and our kibbeling, fried chunks of cod (although many Dutch consumers think kibbeling is a fish species). But for the rest we export most of our mussels, sole, and oysters to people who know properly how to appreciate them, like the French and the Belgians. Instead, we import a tasteless excuse for a fish like tilapia.

But the fish mongers aren’t helping either. Two weeks ago I was buying a tuna steak at the open market in Wageningen. (After my trip to The Philippines I had but one thing on my mind: I want to make that delicious ceviche with fresh ginger and coriander myself!) A youngish bloke for whom this must have been his way of earning his Saturday night drinks served me, and I asked him whether the tuna steak I was buying had been frozen. Silly question, I know – there is no way you can get tuna from its fishing grounds to a Wageningen market stall without freezing it somewhere along the way. “No, it’s all fresh,” he said. So where did it come from? That turned out to be a difficult question. “I don’t know,” he stumbled, looking at me as if I had just asked him about the sound of one hand clapping. “I should ask my boss.” “Pacific ocean,” said a colleague. OK, thanks. “Indian ocean,” said another colleague who looked like she was in charge. “Is that OK with you?” Sure, I was only curious – I wasn’t going to report you to Sea Shepherd or anything.

How can these people not know where their wares come from? I decided against asking the species, because I did not want to prolong their agony. I’m quite sure it was yellowfin anyway. But the limited information they had available was shocking. Even more shocking is the fact that they get away with it, because Dutch consumers just don’t give a rodent’s backside for quality when it comes to fish – let alone how it was caught, whether any other species had been caught in the process, and so on.

Last week I made this picture at the open market in Ede (just North of Wageningen): 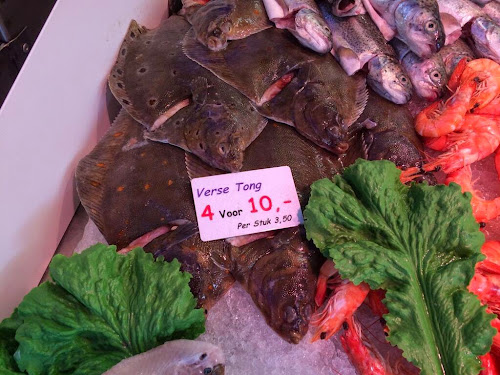 This is what tong, or sole (solea solea) looks like; this is what schol, or plaice (pleuronectes platessa) looks like. You’d expect the orange spots should be a bit of a giveaway.

I guess every country gets the fish mongers it deserves.

In 2002 a Las Vegas film maker came up with a hideous business model: pay homeless people a few dollars or a six pack of beer to conduct dangerous stunts, or to engage in fistfights with other homeless people, and film them. The movies, marketed under the insensitive brand name Bumfights, caused a storm of criticism, especially from advocacy organisations for homeless people, who argued the movies legitimized violence against homeless people, and were demeaning and dehumanizing to the people who participated.

The film makers responded that all homeless featured in the movies participated voluntarily. Surely they can make their own decisions? To which a professor responded

“Even if the homeless aren’t forced to perform, it’s inaccurate to describe people without adequate shelter, food or clothing as having choices.”

I hear the same argument in debates on international trade, Payments for Environmental Services, and other transactions between highly unequal parties: once an African lady reacted angrily to the concept of REDD+, arguing “it’s not a free choice!” I believe it points towards a moral flaw in economic theory that many of my colleagues either do not see, do not want to see, or just don’t care about. I call these transactions Bumfights transactions, after the movie series.

Forgive me for getting a bit theoretical here. Consider Rufus, the homeless man who featured prominently in Bumfights. Back then, Rufus had no home, no job, and he lived by what little he could earn by collecting empty cans. Let’s call the situation he lived in A. Say the film maker offered Rufus $5 if he would ride a shopping cart down a flight of steps. In other words, the film maker offered Rufus a new situation B, which you could define as A + $5 + S, where S is the humiliation and risk of serious injury that goes with the stunt. If Rufus preferred B to A (A ≺ B in mathematical notation), he would participate in the movie; if A ≻ B he would not. Obviously the film maker preferred A ≺ B: for only $5 he would have a lot of fun filming Rufus putting his life at risk, and he would make a big buck selling the video. So they could move from A (no transaction) to B (after the transaction), which they both preferred to A. What’s not to like? In economic terms this is called a Pareto improvement: a change that makes at least one person better off, and none worse off.

The objection to this logic is that Rufus “had no choice”, but an economist would point out that he did: he could choose to refuse participation and stick with collecting cans for a living. No matter how bad this situation was (I surely don’t envy him), obviously participating in Bumfights was better than not participating: after all, he participated, right? Not offering the choice would have left him in A, which is worse than B. The problem is not the transaction; the problem is poverty.

The flaw in this logic is that this may work in the sterile, utilitarian world of microeconomics, but in the real world the film maker also had a choice. He could have paid Rufus $100; he could have offered orange juice instead of alcohol (offering alcohol to somebody with a drinking problem is particularly nasty); he could have refrained from the transaction altogether and donate his $5 to the Salvation Army.

Another issue is that this line of reasoning only works if you care only about the consequences of an act: in other words, it follows a consequentialist ethic, where one could also follow a deontological ethic, or a virtues ethic. Many people consider making money in this way unethical, regardless of the consequences, just for its abusive nature.

Nevertheless, the line between an “equitable” transaction and a Bumfights transaction is blurry. To take the example of REDD+ again, many developing countries have come round to this idea, after initial opposition; it seems Costa Rica and Indonesia are quite keen on it. And how many people have jobs that are dangerous, or just mind-numbingly boring, just because the only alternative is starvation?

So next time you buy your clothes in a cheap clothes store, ask yourself: am I helping a poor Bangladeshi earn an income or am I taking advantage of his poverty? The question is more difficult than you might think.