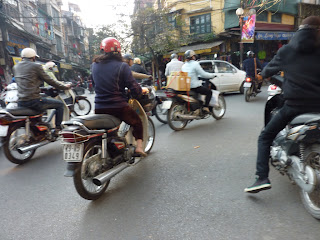 Witnessing the traffic in Vietnam, whether it was the madhouse on the streets of Hanoi or the exasperating driving style of motorists on the highway, I realized that traffic is very much a Prisoner’s Dilemma. The overall motto in Vietnamese traffic is every man for himself. Drives prefer the left lane and adamantly refuse to let others overtake them. Be careful when you cross the street, even at green pedestrian traffic lights: red traffic lights are considered no more than suggestions so you might still be run over by one of the countless motorbikes.

It made me realise that in everyday traffic there are a lot of occasions where you can gain some benefit at the expense of other road users: cross a red light, overtake somebody on his right side, don’t let others pass or enter the highway. On the short term you may benefit from this behaviour, but if everybody behaves this way we are all worse off than if we would just show a little courtesy. You can see the result in many of Vietnam’s streets: congested roads, traffic accidents, aggressive drivers. A game theorist would say that Vietnamese traffic is somewhere in or near its Nash equilibrium (nobody has a reason to change his or her individual behaviour, given the behaviour of others), but the Nash equilibrium is not Pareto optimal (everybody would be better off if everybody behaved differently): the textbook definition of a Prisoner’s Dilemma.

In countries like Norway or the United States, however, the traffic seems much more organised (Dutch drivers, I must confess, are less courteous, but yet more so than Vietnamese drivers). Why don’t Norwegian drivers and American drivers obey our microeconomic models by behaving more aggressively? (I don’t mean to insult Vietnamese motorists, so let’s call it driving assertively.) I believe hefty fines are only part of the explanation. It is also that Norwegian and American motorists consider it bad behaviour: in other words, there are social norms that keep them from driving more assertively.

Another interesting observation is that a Norwegian wouldn’t get anywhere in downtown Hanoi unless he drives like a Hanoian. So once this assertive way of driving becomes the norm it will be very difficult to change it to a more courteous norm. Assertive drivers may get somewhere in Oslo, but perhaps their friends would tell them off for their driving style. In any case many Norwegians consider it bad form, and people have a natural tendency to conform to the dominant norm. So there are self-enhancing mechanisms that keep the dominant social norm in place.

So to understand Elinor Ostrom’s work you don’t have to go to the irrigated rice fields of rural Bangladesh: just get a driver’s license.