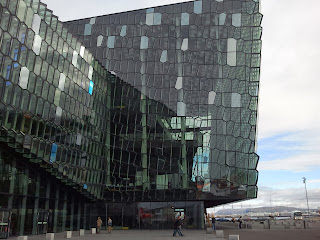 This spaceship currently hosts about 700 fisheries scientists attending the Annual Science Conference of ICES. ICES is an international body that assembles stock assessments and other results from fisheries research in Northern Europe, Canada, and the United States. Fisheries scientists use a lot of detailed models of the marine ecosystem, which allows them (up to a point) to project how different policies affect such things as fish stocks, catches, and so on. I also entered the vessel (more accurately the Harpa conference center and concert hall in Reykjavik, Iceland) to discuss how such models can take the human factor into account. After all, humans take part in the marine ecosystem (in many cases we are the top predator), but we also develop policies with the interests of humans in mind. So if we can model fish, why not also model humans?

“It can’t be done”
A common objection against this is that human behaviour cannot be modelled. Of course, as a model-building economist I don’t agree with that. Economists have a large set of quantitative models at their disposal that describe human behaviour at several different spatial scales, from consumer choices to entire economies or even international trade. Some biologists at the meeting explained that similar objections were made when biologists started developing their own ecosystem models, but that has never stopped such models from proliferating. Why would humans be any different? The discussion set me thinking about the similarities and differences between humans and fish, and how they could make modelling human behaviour easier or more difficult than modelling animal behaviour or ecosystems.

Why humans are like fish
Basically we discussed three objections that were made against biological models, and are now made against modelling humans. First, people object that the object of the model is too complex. That’s true, but so are the global climate, the cascade of nuclear fission and fusion in a hydrogen bomb, and a horde of blood-thirsty zombies climbing over a 50 meter high wall. But that never stopped people from modelling these processes in a plausible manner (admittedly, one of these examples is fictional and no, it’s not the first one). If we don’t model these processes we will never understand them or how they interact with other processes.

A second objection is that the processes are uncertain. But although uncertainty complicates matters, it can be dealt with. You can do a sensitivity analysis to assess the robustness of your results. There are methods to optimize uncertain systems, such as stochastic dynamic programming models or uncertainty analysis. Such steps are necessary, they can be difficult, but that is no reason not to try.

A third objection is that models tend to induce tunnel view, where effects that are not “in the model” are ignored. This is a fair point, and as an economist I must admit that my profession has not been immune to this effect. So we need a diverse ecosystem of theories, approaches, and models, in order to stay open-minded for arguments or effects we hadn’t thought of. Again, this objection has also been made with respect to biological models, and it has never stopped biologists from modelling.

Why humans are not like fish
This is where it gets interesting. First of all, fish don’t read. People, however, may read your report and respond. There is evidence that negative news coverage on consumer confidence further reduces that same consumer confidence. This is a typical feature of social science research: as a researcher you have an impact on your object of research (i.e. people) that goes much deeper than any quantum physicist could get. Your results could be self-fulfilling, as in the consumer confidence case. They could also be self-defeating, as some people argued was the case with Limits To Growth: the stir caused by this report inspired efforts to reduce pollution and resource use to such an extent that we evaded the environmental catastrophe predicted by the report. (I’m not sure I’m buying the argument about this particular example but you get the idea.)

Second, I would argue that humans are much better at anticipating what other humans, including governments, do. For example, a common objection against vessel buybacks is that they create an expectation among fishers that the government will buy access capital (at tax-payers’ expense) when the going gets tough for fishers – an open invitation for creating excess capacity because fishers face only part of the financial risks. Likewise, fishers may anticipate what other fishers do in their decision whether to fish, and how much to fish.

Third, many properties of humans, such as customs, habits, and technologies, are much more subject to change than those of animals. Over the 200,000 years of its existence, homo sapiens has developed sticks, houses, wheels, fish nets, purse seines, and pulse trawls. We’re the only animal with such a massive change in capability and impact. And although economists commonly assume that preferences don’t change over time, I’m not so sure. Suppose we estimate the recreational value of a natural park to be, say, €5 million, will it remain like that forever? There was a time when forests were for cutting down – they were seen as collecting grounds of villains and predators. Now we want to protect them out of love of exercise, hunting, and nature. What if our descendants develop a taste for hikes in virtual reality (or simply get glued to their iPads), and hikes in real forests fall out of fashion?

Fourth, on the bright side, we cannot communicate with fish but in social research we can do surveys and interviews to gain insight into their considerations, their lines of reasoning, and so on. These methods are not perfect (people can lie, or withhold information), but neither are biological measurement tools such as the ones used in stock assessments.

Should we? Can we? How?
The bottom line is that we can to some extent model human behaviour, and by doing so we can address a lot of pressing problems. But it will be tricky. I can’t judge whether it will be trickier than modelling fish, but it will surely be tricky in different ways. Again, that should not be an impairment to doing it.