No musical instrument illustrates the yearning gap between classical music and traditional music like the four-stringed wooden box I’ve been playing for the last 13 years. It starts with the name. Ask me what I play, and I would tell you I play the fiddle; ask a classical musician what it is I play and he would say “violin”. But really, it’s the same instrument. (Admittedly, this only applies to English – the Dutch call it viool, no matter how you play it.) I sometimes meet violinists (that is, classically trained musicians) who approach traditional music as a simple sort of classical music – a subset of classic, to use a mathematical term. If you can play Paganini‘s works, sure you can play The Maid Behind The Bar, right?

It starts with the fact that we know the composers of almost all compositions in classical music, but most tunes in traditional music have composer “unknown”. The composer of a classical piece still owns it, as it were. Change the notes and it’s not the same piece anymore; even worse, it would be disrespectful, like painting a mustache on the Mona Lisa. Yes, classical musicians interpret the music they play in their own way, through the intonation and the dynamic they (or the conductor) choose. But they must stick to the written music. On the other hand, apart from recent compositions, traditional music is public property. In fact, part of the fun of playing traditional music is the freedom of interpretation: let’s put in some more syncopation by playing these notes a bit differently… Did you know that this tune sounds great when you play it in a minor scale? If I bind those notes and skip these it sounds really great on the fiddle. Also, there are often many versions around of the same tune.

Second, traditional music was originally developed to accompany dancers, so the most important element of it, high above the rest, is the rhythm. You can be a virtuoso all you like, it don’t mean a thing if it ain’t got that swing. Classical music, on the other hand, remains a work of art, strongly associated with the composer. So all facets, including melody, harmony, and arrangement, are to be appreciated, and rhythm is usually not the most important part of it.

Third, a classical training starts with reading music, whereas a good workshop in traditional music teaches the tune by ear. Let me be even clearer on this. I know a musician who took classical music lessons as a kid and she told me her father would slap her if she gave only the slightest hint of playing by memory rather than from sheet music. On the other hand, in most fiddle workshops people have recorders with them (mobile phones, nowadays), and the teacher distributes sheet music only at the end of the workshop, if at all.

This will sound mean to you if you are a classical musician, but every now and again I meet violinists who cannot learn a tune by ear, and even if they know the tune they still cannot play it by heart. Like barrel organs, they’re lost without their sheet music.

So kids, when you want to learn to play music, stop reading it. 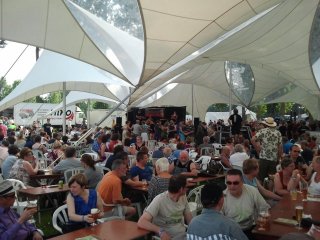 Call me a snob, but I’ve never cared much for the music you hear on everyday radio. I don’t know what it is. I prefer the grinding doom of Ufomammut and the richness and purity of a skilled traditional fiddler to the polished one-size-fits-all music mostly served on prime time. So while around 80,000 pop music lovers were sweating away in a simmering Rock Werchter, I was one of the 5,000 folk music lovers enjoying the atmosphere, the music, and the local lambic beer at the Gooikoorts festival.

I discovered traditional music (like many of my generation) through The Pogues. While attending college I spent four months in Ireland, going after the local folk music with my guitar and buying a cheap and crappy mandolin. Years later the Saint Chartier festival was a revelation to me: all those musicians, all those dancers, all those instrument makers, in such a small village! As soon as I came home I hung the mandolin on a wall and bought a fiddle. The fiddle’s been with me ever since. Slowly the Saint Chartier festival gave way to Gooikoorts, which feels like a much smaller and friendlier version of Saint Chartier with even a higher degree of joie de vivre. In Dutch I would call it “Burgundian”, a term that refers to the days when present-day Belgium, Luxemburg, and The Netherlands were part of the Duchy of Burgundy, but also to the stereotype of a people that loves the good life.

Gooik is a small village (about 9,000 inhabitants) in the Pajottenland, southwest of Brussels. The region is famous for its mattetaarten (cakes made from cream and buttermilk), but even more famous are its unique beers. Unlike most beers, where carefully selected yeasts convert the sugars to alcohol, geuze and lambic get their fermentation bugs from the open sky. The beers are an acquired taste: deeply sour, and in the case of lambic not a single bubble of carbonate. But once you get used to the sourness you start appreciating the tones of apple and oak not found in any other beer. Many brewers from other regions, from West-Flanders to the United States of America, have tried to imitate the process by taking samples from the Pajottenland air, but so far they haven’t been able to beat the real thing. You need the right mix of micro-organisms, especially Brettanomyces bruxellensis, which is a bacterium unique to the region. Real geuze and lambic can only be brewed in the Pajottenland, and nowhere else.

Since 1997 Gooik has its own geuzestekerij. “Steken” is a local term for blending, so a stekerij is a place where geuze is matured and blended, but not brewed – they get the wort from other breweries and mature and blend it in Gooik. I finally had the opportunity to visit the geuzestekerij and buy some bottles of the stuff. The place is crammed with 200-year old oak casks where the beer matures, soaking in the oak flavour as well as more germs. The beer matures for 3-6 years (“1 bottle = 3 years work”, the label says) and is then blended to oude geuze or mixed with fruit. What struck me was the dedication to tradition of the people working in the stekerij, but also its international appeal. Just when I entered the building there was a delegation from Brazil tasting the local brew.

The local brew and the excellent food are just two of the many factors that add to Gooikoorts’ Burgundian atmosphere. The bands play mainly traditional European folk, varying from strictly traditional Flemish folk songs, to jazzy interpretations of French dance music, to mixtures of Finnish polka and bluegrass. All generations are present: young parents with toddlers in their arms, teens with hormone-driven chutzpah, pensioners with an open mind. For me, the greatest enjoyment was to meet old friends, and to grab the fiddle and play. Ten years ago, at the first edition of the festival, we would play until the sun rose, sleep a few hours, and party on. Now most of us had kids, a demanding working life, or both, so we took it easy. And easy is how you take Gooikoorts.

Have a great summer.

I could think of no better way to start the academic year than by welcoming our first Chinese sessioneer:

One of the greatest things about Wageningen is that you meet people from over the world. It’s a fairly small university, but it is very internationally oriented, so there is no escaping our international students and staff.

Some of them find themselves in a small pub on a Sunday afternoon listening to a couple of folks playing bagpipes, fiddles, hurdy-gurdies and other strange acoustic instruments. That would be me and my fellow musicians at the monthly traditional music session in Café De Zaaier:

(I’m the one holding the camera.)

We have been doing this every month for more than 10 years now, and I know we should count ourselves very lucky. It’s the perfect setting for a traditional music session: the pub is a traditional ‘bruin café’ (literally “brown pub” – a type of Dutch pub named after its dark brown wooden interior) with a large collection of Dutch and Belgian genevers, many different beers (including Guinness and Kilkenny – Irish sessioneers seem to be quite keen on that) and the owner is a musician with a love for folk music. This being Wageningen, we have enjoyed the company of musicians and listeners from Mexico, the Czech Republic, Sweden, Eritrea, and, lately, the Basque country:

Everybody is welcome to come and listen or to play along. All traditions are welcome – this diversity is one of the fun things! The only thing to mind are three rules:

Curious? We have a website where you can find all the details.