Call me a snob, but I’ve never cared much for the music you hear on everyday radio. I don’t know what it is. I prefer the grinding doom of Ufomammut and the richness and purity of a skilled traditional fiddler to the polished one-size-fits-all music mostly served on prime time. So while around 80,000 pop music lovers were sweating away in a simmering Rock Werchter, I was one of the 5,000 folk music lovers enjoying the atmosphere, the music, and the local lambic beer at the Gooikoorts festival.

I discovered traditional music (like many of my generation) through The Pogues. While attending college I spent four months in Ireland, going after the local folk music with my guitar and buying a cheap and crappy mandolin. Years later the Saint Chartier festival was a revelation to me: all those musicians, all those dancers, all those instrument makers, in such a small village! As soon as I came home I hung the mandolin on a wall and bought a fiddle. The fiddle’s been with me ever since. Slowly the Saint Chartier festival gave way to Gooikoorts, which feels like a much smaller and friendlier version of Saint Chartier with even a higher degree of joie de vivre. In Dutch I would call it “Burgundian”, a term that refers to the days when present-day Belgium, Luxemburg, and The Netherlands were part of the Duchy of Burgundy, but also to the stereotype of a people that loves the good life.

Gooik is a small village (about 9,000 inhabitants) in the Pajottenland, southwest of Brussels. The region is famous for its mattetaarten (cakes made from cream and buttermilk), but even more famous are its unique beers. Unlike most beers, where carefully selected yeasts convert the sugars to alcohol, geuze and lambic get their fermentation bugs from the open sky. The beers are an acquired taste: deeply sour, and in the case of lambic not a single bubble of carbonate. But once you get used to the sourness you start appreciating the tones of apple and oak not found in any other beer. Many brewers from other regions, from West-Flanders to the United States of America, have tried to imitate the process by taking samples from the Pajottenland air, but so far they haven’t been able to beat the real thing. You need the right mix of micro-organisms, especially Brettanomyces bruxellensis, which is a bacterium unique to the region. Real geuze and lambic can only be brewed in the Pajottenland, and nowhere else. 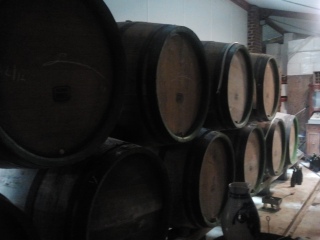 Since 1997 Gooik has its own geuzestekerij. “Steken” is a local term for blending, so a stekerij is a place where geuze is matured and blended, but not brewed – they get the wort from other breweries and mature and blend it in Gooik. I finally had the opportunity to visit the geuzestekerij and buy some bottles of the stuff. The place is crammed with 200-year old oak casks where the beer matures, soaking in the oak flavour as well as more germs. The beer matures for 3-6 years (“1 bottle = 3 years work”, the label says) and is then blended to oude geuze or mixed with fruit. What struck me was the dedication to tradition of the people working in the stekerij, but also its international appeal. Just when I entered the building there was a delegation from Brazil tasting the local brew.

The local brew and the excellent food are just two of the many factors that add to Gooikoorts’ Burgundian atmosphere. The bands play mainly traditional European folk, varying from strictly traditional Flemish folk songs, to jazzy interpretations of French dance music, to mixtures of Finnish polka and bluegrass. All generations are present: young parents with toddlers in their arms, teens with hormone-driven chutzpah, pensioners with an open mind. For me, the greatest enjoyment was to meet old friends, and to grab the fiddle and play. Ten years ago, at the first edition of the festival, we would play until the sun rose, sleep a few hours, and party on. Now most of us had kids, a demanding working life, or both, so we took it easy. And easy is how you take Gooikoorts.

Have a great summer.